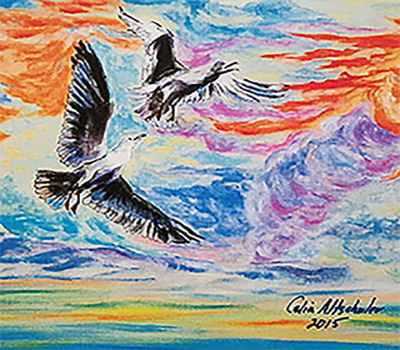 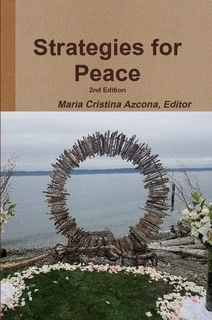 The authors invited to join me at this chapter of Strategies for Peace, are Bruce Cook, Ernesto Kahan, Ada Aharoni, Susana Roberts, Sara Zamir, Glenn Martin, Nina Meyerhof, Takis Ioannides, George Sklavounos, Bishnu Pathak, Subhash Chandra, Elias Galati, Marita Ragozza and Domen Kocevar. We need to create a discussion and a continuous dialogue, by inviting brilliant intellectuals from all points of the globe to interchange opinions, read one to the other, and let mutual influence be the media of our union as human beings. We are here, talking like friends, interchanging ideas about developing a possible future for our kids, and we find one to the other so near, so similar in our thoughts, so clear in our ideas, that we cannot stop continuing our dialogue in this sense, and through this tool called Strategies for Peace. To create books, written by persons that come from diverse cultures, is the tool to find a way out of this Babel Tower that leads humanity to an enormous hollow of Death and Disappearance

MULI WA KYENDO (ed.) - This book develops and expands on theories that aim at explaining the root causes of ethnic and racial conflicts. The aim is to shift focus from research, policies and strategies based on tackling the effects of ethnic and racial conflicts, which have so far been ineffective as evidenced by the increase in ethnic conflicts, to more fundamental ideas, models and strategies. Contents extend across many disciplines including evolution, biology, religion, communication, mythology and even introspective perspectives. Drawn from around the world, contributors to the book are respected and experienced award winning authors, scholars and thinkers with deep understanding of their special fields of contribution. The book was inspired by the conditions in Kenya, where ethnic violence flared up with terrifying consequences following a disputed election in 2008. Although the conflict was resolved by the intervention of the international community, Kenyans – like many other Africans - continue to live in fear of ethnic conflicts breaking out with more disastrous consequences. The book will be useful to policy makers, NGOs and others involved in promoting peace. It will also be useful in guiding research and as a text book in universities and colleges.

PEACE' THE PATHWAY FOR CONFLICT RESOLUTION, SELF-REALIZATION AND NATIONAL TRANSFORMATION AND DEVELOPMENT, by Damian Amazu

DAMIAN AMAZU - We are living in a warring and conflicting world where peace is only discussed when there`s chaos, conflicts, wars and crisis. Having looked around and realized the wrong direction and approach we are using to curb war and discuss about peace, then I did a research on better ways to enhance a peaceful world especially in African countries. Peace is well defined with its benefits to every individual in our daily lives, the advantages of peace, how to maintain peace in our homes, communities, places of work and how to actualize personal peace are inclusive. The impact of war is vividly discussed which includes the causes of war, disadvantages and what can be done to avoid war and ways it can be achieved with stipulated measures. Several reasons as the causes and menace of war were outlined especially in African countries. This book will serve as a manual for peace education and personal use. It is a good piece for adults, young adults, teenagers, peace educators, students, peace... More >

Handbook of Research on Examining Global Peacemaking in the Digital Age, by Bruce L. Cook (ed.)

BRUCE L. COOK (ed.) - Violent behavior has become deeply integrated into modern society and it is an unavoidable aspect of human nature. Examining peacemaking strategies through a critical and academic perspective can assist in resolving violence in societies around the world. The Handbook of Research on Examining Global Peacemaking in the Digital Age is a pivotal reference source for the latest research findings on the utilization of peacemaking in media, leadership, and religion. Featuring extensive coverage on relevant areas such as human rights, spirituality, and the Summer of Peace, this publication is an ideal resource for policymakers, universities and colleges, graduate-level students, and organizations seeking current research on the application of conflict resolution and international negotiation.

ADA AHARONI, MARIA CRISTINA AZCONA, ERNESTO KAHAN, SUSANA ROBERTS - Despite our wars, despite our tears,
Despite our furtive fears,,
We welcome the smiling Year of Hope.,
The power of women for peace is increasing,,
Democracy and the Internet are spreading,,
Global poverty has been reduced by half.,
Never ordinary people, like you and me,,
we have had more power to face the challenges,
And to decide our own destiny of not killing.,
We are ready at the edge of the cliff between,
Our oldest fears of terror and war,
And our deepest dreams of peace.,
We are faced with a choice: to rise to this moment in time.,
And be the peace we want to see.,
Everything depends on us, for us lovers of peace.,
We are the largest global community!,
In this year of hope, we cheerfully embrace.,
The golden sunbeam of hope with much waltz.,
Until you see the Global Peace sparkle.

BRUCE L. COOK AND MARIA CRISTINA AZCONA - Full Index. I join Maria Cristina Azcona in offering this collection of viewpoints on peace making. She and I joined Ernest Kahan in 2014 to establish the Worldwide Peace Organization in Argentina. Here we identify a startling variety of facets on the crystal which represents peace. Virtually everyone claims to want world peace. Only a few take measures to promote it. Each writer who seeks peace suggests a unique dimension. It's our hope that this volume will encourage students, professors, and peacemakers to consider this comprehensive look at ten strategy perspectives which, if taken seriously in private and public life, might lead to our shared objective - worldwide peace in our time. * Leadership * Language and Leadership * Interspiritual * World Citizenship * Family Relations * Role of Women * Education * Medical Actions * The Arts * Conflict Resolution

About Peace and Peacemaking, by Maria Cristina Azcona (ed.)

MARIA CRISTINA AZCONA - SECOND EDITION - This is a compilation of peace articles by famous writers and philosophers specialized in peace building matters and a summary of their respective point of view. Twelve writers, twelve minds, twelve styles but only one obsession: To resolve the dilemma of war, social violence and the preservation of human life. Love, life, humanity, serenity of thought, familiar peace and other meanings around the need of a change in this crazy, violent and self destructive civilization, are some of the topics in these essays. Peace is possible especially through literature as we explain in the book but also through the education of respect to human dignity… Take a tour on our proposal of solutions to this severe illness that is causing the decadence and perhaps death of our blue planet Earth. Read and think on your own point of view and rethink this book upon your vision. That is our dream. We cannot wait, we want to read your own creative opinion.

Poetry of Peace and Harmony, by Guy Créquie

DR. LEO SEMASHKO et. al. - Global Peace Science (GPS) is the first in history the science of world peace, after more than two centuries of the birth of military science in the Adam Bülow’s book in 1799. The GPS cognitive result is the first scientific extremely laconic formula of peace: “peace from harmony of SPHERONS through science”, which determines a source, social actors and main way of global peace. The objective grounds and numerous details of this formula are disclosed in the book 13 chapters in different dimensions: social, philosophical, historical, structural, functional, political, economic, personal, educational, psychological, legal and others.

GUY CRÉQUIE - Whenever Guy Créquie, a recognized writer and philosopher, makes a publication like the present one, it always generates a great expectation among the audience.
His permanent updating of the global policy and social issues, along with his philosophical knowledge, since the French Revolution of 1789 to the present, makes a perfect combination for the interpretation of current problems and dilemmas.

Pilgrimaging in Love: A Selection of Poems, by Lida Sherafatmand

LIDA SHERAFATMAND. Lida Sherafatmand is known as a painter, but over the years her poetry has been published in several anthologies and books. Born in 1977 in Iran (the old Persia), she experienced a childhood during war time under the newly formed regime of the 1979 revolution. Her birth city, Khorramshahr was completely destroyed in the bombardments at the beginning of the Iran-Iraq war of the 1980's. At the age of 15 Lida discovered the Universal Declaration of Human Rights through Amnesty International, and she saw this declaration like an opening door to a more humane world, where people can be respected regardless their nationality or culture. Her paintings focused on human rights issues were published by major bodies such as Amnesty International, UN, UNESCO, and many non-governmental organisations. Her more recent art works appear on numerous art and cultural journals internationally. Lida is based in Malta.

LIDA SHERAFATMAND - Teaching Human Rights using Art provides an enjoyable means of learning for children. Art can be a particularly effective means for teaching children who are in difficult social situations where self-expression has been suppressed. Therefore, in this kit self- expression will help the child understand his or her existence as an individual and consequently the rights that belong to him or her within the human community. The articles taught in this kit are from the United Nations' Universal Declaration of Human Rights, 1948.

The ABC of Harmony: for World Peace, Harmonious Civilization and Tetranet Thinking: Global Textbook, By Dr. Leo Semashko and 75 GHA co-authors from 26 countries

DR. LEO SEMASHKO AND 75 GHA CO-AUTHORS FROM 26 COUNTRIES - The ABC of Harmony is the dawn of a shining, harmonious vision of peace and prosperity for all the nations of the planet earth! Together with it, enlightened citizens will emerge capable of building a harmonious civilization of peace and prosperity on the planet earth. – Dr. APJ Abdul Kalam (poet, President of India, 2002-2007)